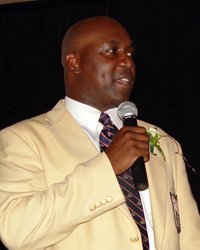 Thurman Lee Thomas (born May 16, 1966 in Houston, Texas) grew up playing football on the Missouri City Junior High School and Willowridge High School teams before attending college at Oklahoma State University and playing most of his NFL career for the Buffalo Bills. Thurman is a member of both the College Football Hall of Fame and the Pro Football Hall of Fame. At Oklahoma State, Thomas had 897 rushes for 4,595 yards, 43 touchdowns, 5,146 total yards, and 21 100-yard rushing games. He was also a Heisman Trophy candidate in his senior year. He was a first team selection on the College Football All-America team in 1985 and 1987. In the 1987 Sun Bowl, Thomas ran for 157 yards and four touchdowns in the 35-33 victory over West Virginia, keeping teammate Barry Sanders on the sidelines for the majority of the game. Thomas left OSU as the school's all-time leading rusher and his number 34 is one of only three jerseys retired at Oklahoma State. The Buffalo Bills selected Thurman THomas with their first pick in the 1988 NFL Draft. Thomas is well known as part of the offense that included Jim Kelly and Andrew Reed which led the Bills to four straight Super Bowl appearances. Thomas was the AFC rushing leader in 1990, 1991, and 1993. In the first three seasons of this career, Thomas had a total of 12 games with at least 100 yards rushing. The Bills won every one of those games. In 1989 and 1990, his combined total yards from scrimmage was 3,742. This was more than 200 yards better than any other player in the NFL. He was voted to the All-Pro team in 1990 and 1991, was selected to 5 straight Pro Bowls from 1989–1993, and was named the NFL MVP in 1991, after becoming the 11th player in NFL history to finish a season with over 2,000 all-purpose yards. Thomas currently holds the all-time Buffalo Bills rushing record with 11,938 yards and the team record for yards from scrimmage with 16,279 over 12 years. He is also 4th overall in team scoring. Overall, Thomas finished his 13 seasons (his 13th season he played for Miami) with 12,074 rushing yards, 472 receptions for 4,458 yards, and 88 touchdowns (65 rushing and 23 receiving) with 16,532 total yards from scrimmage. He is one of six players (Jim Brown, Lenny Moore, Marcus Allen, Marshall Faulk, and Herschel Walker) to exceed 60 TDs rushing and 20 TDs receiving. Thomas is the only player in NFL history to lead the league in total yards from scrimmage for four consecutive seasons. He is one of only six running backs to have over 400 receptions and 10,000 yards rushing. Thomas is also one of five running backs to have rushed for over 1,000 yards in 8 consecutive seasons. Thomas also set NFL playoff records with the most career points (126), touchdowns (21), and consecutive playoff games with a touchdown (9). Overall, he rushed for 1,442 yards and caught 76 passes for 672 yards in his 21 postseason games. He is also the first player ever to score a touchdown in 4 consecutive Super Bowls. Thurman played for the Buffalo Bills for 12 seasons. When the Bills ran out of money under their salary cap in 2000, Thomas signed with the Miami Dolphins. He suffered a knee injury on November 12, 2000 against the San Diego Chargers which ended his NFL career. After deciding to retire, Thurman signed a one-day contract on February 27, 2001 with Buffalo so that he could retire as a Bill. Thurman Thomas was selected on February 3, 2007, to be inducted into the Pro Football Hall of Fame.

Learn more on how to hire Thurman Thomas. Submit a Request Below.