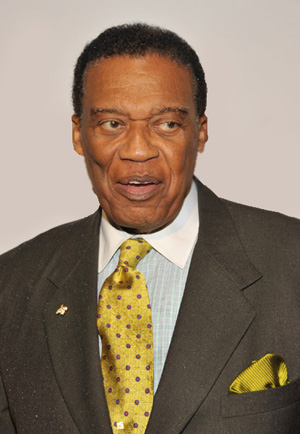 Bernie Casey was born on on June 8, 1939, in the small town of Wyco, West Virginia. When he was young, he and his family moved to Columbus where he went to Garfield Elementary School, Champion Junior High, and Columbus East High School. At an early age, Casey had already shown an aptitude for the arts including drawing and painting, and soon developed his athletic skills as well, particularly for football and basketball. Casey attended Bowling Green State University (BGSU) in Ohio in 1957, where he had an athletic scholarship, where he remained intent on becoming an artist. Casey excelled in football while attending BGSU, and was considered a key player in the school’s 1959 championship season. He was named a member of the Little All American Team, and was also competitive in track and field. He received his B.S. degree in Art Education from BGSU and then received his Master of Fine Arts degree also from BGSU. In 1961, after he received his B.S. degree, Casey was drafted into the NFL in the very first round by the San Francisco 49ers. He stayed with them for six seasons, followed by two years with the Los Angeles Rams. In the off-season, Casey returned to Bowling Green State University, in order to complete his M.F.A. degree, which he received in 1966. After his standout athletic season in 1967 when Casey caught 53 passes for a career-high 871 yards and eight touchdowns, He was named to the 1968 Pro Bowl team. Shortly thereafter, Casey became disillusioned with the NFL and professional sports in general, and decided to return to his creative pursuits. In 1969, Casey appeared in his first film called Guns of the Magnificent Seven, a sequel to The Magnificent Seven; that same year, he wrote Look at the People: Poems and Paintings, a book of art and poetry. Casey published two similar books later on in his career called Where is the Revolution? And Other Poems in 1973, and Silent Screams in 1983. In 1971, He also produced an independent film entitled Bernie Casey: Black Artist, which was primarily about his thoughts and observations as a painter. As an artist, Casey has produced more than 30 solo exhibitions; he received an honorary doctorate degree from The Savannah College of Art and Design (SCAD) in Savannah, Georgia. He served there for twenty years as chairman of the board and advocated for arts education. Casey has made over fifty-seven appearances in film and television, including the movies Cleopatra Jones, I’m Gonna Git You Sucka, Revenge of the Nerds, and Bill and Ted’s Excellent Adventure; and TV programs such as Star Trek: Deep Space Nine and L.A. Law. In 1997, Casey produced, wrote, directed and acted in The Dinner, an allegorical drama.

Learn more on how to hire Bernie Casey. Submit a Request Below.