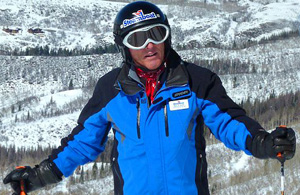 Kidd made a name for himself that first season at age 18 with an eighth place in the slalom and a 15th place in the giant slalom (GS) at the 1962 World Championships in Chamonix, France. After enduring a season hampered by injuries, Kidd entered the 1964 season with high hopes and gritty determination. A silver medalist in the slalom at the 1964 Winter Olympics in Innsbruck, Kidd was the first American man (along with Heuga, who took bronze in the same race) to earn an Olympic medal in alpine skiing. Both Kidd and Heuga were just 20 years old at the time. Kidd finished seventh in the giant slalom and 16th in the downhill. Finishing all three races kept him eligible for the combined, then a non-medal event in the Olympics (but a World Championship medal event), and he took third for the FIS bronze. In the final non-World Cup season of 1966, Kidd won three important races in Europe and was actually outracing Jean-Claude Killy. Kidd suffered the first of two major injuries that almost ended his career, an ankle sprain in late January, which resulted in a tendon operation. Later the same year he broke his right tibia in two places during downhill training at the 1966 World Championships, held in August in Portillo, Chile. The injury kept also him out of the first World Cup season of 1967. During this injury time he returned to college at the University of Colorado in Boulder. The following year he took fifth in the giant slalom (GS) at the 1968 Winter Olympics in Grenoble, France. He took 15th in the downhill, but did not finish the first run of the slalom, which was held in thick fog. Following those Olympics, he won a World Cup slalom in Aspen in March and finished 7th in the overall World Cup standings, the best from North America. For the 1968 World Cup season, Kidd finished in the top ten in all three events: 8th in giant slalom, 9th in downhill, and 10th in slalom. His first World Cup victory came a month later at the Roch Cup slalom in Aspen, Colorado. His second win came a year later, also a slalom on U.S. snow at Squaw Valley, California. At the 1970 World Championships in Val Gardena, Italy, Kidd won the gold medal in the combined and the bronze in the slalom. On winning the gold, he said, I'd always promised my mom I'd bring home a gold medal." Following the conclusion of the World Championships in mid-February 1970, Kidd retired from the World Cup circuit, and immediately joined the new pro circuit, started by former U.S. Ski Team coach (and Kidd's and Heuga's University of Colorado ski coach) Bob Beattie.[15] Kidd won the pro championship the same year, the only racer to hold world titles in the two circuits at once. Nagging injuries led to few starts during the 1972 season and he retired from the pro circuit that fall. Kidd graduated from the University of Colorado in 1969 with a B.S. degree in economics. Kidd's heritage is part Native American (Abenaki). He is honorary captain of the Native American Olympic Ski Team. In 2013, Kidd was inducted in to the Vermont Sports Hall of Fame. Steamboat Springs[edit] Kidd moved to Steamboat Springs, Colorado, in 1970, and ever since has been strongly identified with the Steamboat Ski & Resort Corporation, where he serves as its Director of Skiing. 2014 will mark his 44th year on the job at Steamboat Ski Resort. As ambassador not just for Steamboat, but for the American West and the sport of skiing, Kidd is instantly recognizable by his Stetson cowboy hat. During ski season, skiers and snowboarders can join Kidd for a daily free, on-mountain clinic (when he is in town) at 1 PM at the top of the Steamboat gondola. When you "ski with Billy Kidd" down the Heavenly Daze intermediate run, you'll get ski tips, and learn about what it's like to ski in the Olympics. Kidd has served on the board of directors of Special Olympics International, the President's Council on Physical Fitness, and The Jimmie Heuga Center for the Physically Challenged (Multiple Sclerosis) in Vail. He hosts corporate ski outings for companies including American Express, Rolex, UPS, American Airlines, TIME and Sports Illustrated magazines, and several others."

Learn more on how to hire Billy Kidd. Submit a Request Below.