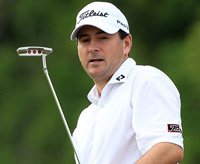 Curtis turned professional in 2000, originally playing on the Hooters Tour without any success. At the end of 2002, he finished in a tie for 26th at that year's Q-School, earning his PGA Tour card for the following year, becoming one of the few players to completely skip the Nationwide Tour. His first year on tour began unspectacularly as he made a fair amount of cuts, but had no finishes in the top 25, until a tie for 13th at the Western Open on July 6, which qualified him for the British Open in England less than two weeks later. 2003 Open Championship win[edit] Curtis entered the The Open Championship at Royal St George's in 2003 as a 300–1 outsider, defying the odds to win the tournament. After an opening round 72 (+1), he shot a second round 72 to pull into a seven-way tie for fourth. A third round 70 put Curtis in a five-way tie for third, two strokes behind leader Thomas Bjørn and one stroke behind second-place Davis Love III. While Bjørn shot a final round 72, Curtis fired a 69 to finish at −1, one stroke ahead of Bjørn and Vijay Singh. The 2003 Open Championship was Curtis' first appearance in a major. He became the first golfer since Francis Ouimet in the 1913 U.S. Open to win his major championship debut, later accomplished by Keegan Bradley in the 2011 PGA Championship. After his victory, Curtis jumped from 396th in the world rankings to 35th, the highest jump for any player. This victory and a solid first season on the PGA Tour led to Curtis being named the 2003 PGA Tour Rookie of the Year. Curtis' Open Championship victory gave him a five-year exemption on the PGA Tour and a 10-year exemption on the European Tour, and he played events on both tours in 2004. However, he did not experience immediate success, missing many cuts and only recording one top-10 finish on the PGA Tour. He missed even more cuts in 2005 and only had two top-10 finishes. In 2006, his results improved as he made the cut much more consistently and recorded two wins, the Booz Allen Classic and the 84 Lumber Classic. His consistent form continued into 2007 and he tied for 8th place at that year's Open Championship in Carnoustie, his best result in a major since winning the tournament. 2008 was Curtis' most consistent season, as he recorded five top-10 finishes and missed only four cuts. He bettered his Open Championship result from the previous year by finishing in a tie for 7th at Royal Birkdale and followed it up a month later by finishing tied for 2nd place in the PGA Championship at Oakland Hills. This second-place finish qualified him for the 2008 Ryder Cup, his first appearance in the event. This consistent form continued into 2009, with only three missed cuts in 18 PGA Tour events. However, Curtis managed only one top-20 finish and ended the year outside the top 100 in the money list. However, he did achieve two top-10 finishes on the European Tour. At the 2009 Open Championship at Turnberry, Curtis shot a 65 to tie for second after the first round, but a second round 80 meant that he missed the cut by one shot. In 2010, Curtis missed only eight cuts in 24 events, but achieved only one top-10 finish and he ended outside the top 100 on the money list for a second consecutive year. A rough 2011 season saw Curtis finish 149th on the PGA Tour money list after making 10 cuts in 23 events, leaving him partially exempt for the 2012 PGA Tour season. For the start of the 2012 season, he split his time between the European Tour and PGA Tour, taking advantage of his European Tour exemption and attempting to qualify for the Race to Dubai. In April 2012, Curtis won the Valero Texas Open for his fourth PGA Tour victory, ending a six-year winless drought. Curtis held a one-shot lead entering the 71st hole and made a 22-foot putt for par to maintain his lead. He went on to birdie the last hole, sinking a 12-foot birdie putt for a two-stroke victory over Matt Every and John Huh. With the win, Curtis regained full exemption status on the PGA Tour through 2014. Curtis jumped from 200th to 28th in the FedEx Cup standings and moved up over 100 places in the world rankings to 156th. Curtis followed up his win at the Valero Texas Open with three straight top-15 finishes (tied for 13th at the Zurich Classic, tied for 5th at the Wells Fargo Classic, and tied for 2nd at The Players Championship). This moved him into the top 75 of the Official World Golf Ranking. His career high ranking is 24th. He also finished tied for 11th in the PGA Championship, his best finish in a major championship in four years. In 2013 Curtis played in 20 PGA Tour events, making the cut in 10 with three top-25 finishes. His 2014 season netted him one top 10 and ten missed cuts in 24 starts to finish 131st in the FedEx Cup, leaving him partially exempt for the 2014–15 season.

Learn more on how to hire Ben Curtis. Submit a Request Below.