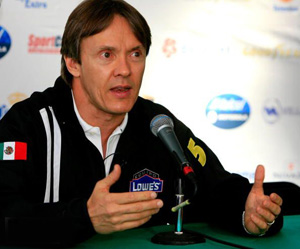 One of the most popular athletes will come from Mexico, Adrian Fernandez has enjoyed a career that spans over 30 years. His success on the track and passion for the sport have placed it on a world stage with a large fan following around the world. Fernandez began his career on two wheels in 1973, motocross racing when he was 8 years old. After spending most of his early years watching races of his uncles, James and Joseph, compete in track Hermanos Rodriguez in Mexico City, decided to follow in his footsteps. He entered his first race at the age of 16 years, holding sessions of the 24 Hours of Mexico. Although Fern'ndez could not finish, his father impressed enough to win their support and compete in the Marlboro Cup Formula Vee the following year. Fernandez did not disappoint, claiming rookie of the year followed by two consecutive titles in Formula Vee. He graduated from the Formula K and successfully honed his skills in the Premier category of open wheel Mexico before leaving his homeland at the age of 22 to pursue his career in Europe. Amid the instructor working as a mechanic and racing school in the historic circuit of Brands Hatch in England, Fernandez continued to polish their driving talents competing in the development of European Formula Ford open wheel series. In 1989, finished fifth (scoring points in all but one race) at the prestigious RAC British Formula Ford Championship, which field contains the future of the Champ Car-IRL featured Gil de Ferran and Formula One star David Coulthard. At the age of 25 years, Fernandez returned to Mexico and spent two years in the International Formula 3 Championship. He continued to impress, finishing second in the championship in 1990, before claiming the championship title on the heels of seven pole positions and four race wins next year. Fernandez made his debut on the American racing scene in 1992, and sent the flight log books for most laps led and more oval rookie season wins Firestone Indy Lights Championship, en route to capturing Rookie of the Year. His first appearance in a Champ Car came the following year in the Grand Prix of Long Beach, in a partial season of competition with Galles Racing International. He stayed with Galles, until 1995, and joined Tasman Motorsports Group in 1996, recording his first Champ Car victory in Toronto this year. Three years of success, including six wins Champ Car, with Patrick Racing which followed the 2000 CART season marked another turning point in his career. Fernandez emerged as a real contender for the title, finishing 10 points shy of the series crown in second place. Along with Fernández strong performance on the track there was a strong desire to control their own destiny, and in the fall, announced it would be forming his own team, in partnership with former Target / Chip Ganassi Racing director, Tom Anderson. Fernandez Racing opened in December 2000 and entered a shopping competition just three months later. The 2003 season marked the best year so far for the team that bears his name. Fernandez claimed his eighth win in the Champ Car race at Portland International Raceway in June, marking its first victory in its dual role as owner / driver and also the first win for an owner / driver in more than a decade. [Bobby Rahal was the last one in Nazareth in 1992.] Finished the season with 13 consecutive points finishes paying, Fernandez could only complete two runs - both by contact with other drivers. He closed the eighth year in the championship after a close battle with just 15 points separating the finalists from sixth to ninth. Fernandez had the best year of my career in 2004. A late decision to switch to the IndyCar Series meant he missed pre-season testing and the first race, but Fernandez catapulted the radar screen, winning three of the final season of six races in Kentucky, Chicago and California. A second in Pikes Peak run and fifth in the season finale in Texas, moved to an impressive Fernandez ranks fifth in the classification of the endpoint. In 2005, Fernandez struck first a relationship with the second largest - Lowe's of the world retail home improvement - when he made his debut in Stock Car Racing Team for Lowe's and Hendrick Motorsports, in a history-making race NASCAR Nationwide Series in historical track Hermanos Rodriguez in Mexico City. At the end of the season, during which contested five National Series races, the association led to the formation of Lowe's Fernandez Racing. The team entered the sports car racing in 2006 with Fernandez participate as an owner of both a computer and the driver of the Grand-Am Rolex Series. Together with co-driver Mario Haberfeld, Fernandez captured an overall victory in the race at Mid-Ohio Sports Car Course and a qualifying race win in Phoenix. Lowe's Fernandez Racing shifted his attention to the American Le Mans Series in 2007 and culminated in a ruling class championship LMP2 winning season in 2009 during which Fernandez and co-Chapulin 'pilot Luis Diaz said eight wins and finished on the podium in each October 1 racing season driving the # 15 Lowe's Acura ARX-01b sports car. Starting in 2010, Fernandez has opened a new chapter in his career and drive to the computer icon Aston Martin Racing on a selection of prestigious sports cars, including the 24 Hours of Le Mans and the Twelve Hours of Sebring."

Learn more on how to hire Adrian Fernandez. Submit a Request Below.