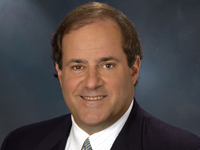 In October 1979 -- one month after its inception -- ESPN hired a little known 24-year-old sports anchor named Chris Berman. Since then, Berman, with his trademark combination of wit, enthusiasm and knowledge, has come to embody ESPN in its dedication to entertaining and informing sports fans across the country. Berman has established himself as one of television's most popular and entertaining sports commentators -- and one of its most respected. Five times the versatile Berman has been selected the National Sportscaster of the Year (1989, 1990, 1993, 1994 and 1996) by the members of the National Sportscasters and Sportswriters Association. He is the only cable commentator ever chosen. Berman and his various shows have won six Emmy Awards and 12 CableACEs. Berman's primary responsibilities include ESPN's NFL programming. He hosts NFL Countdown, a weekly Sunday morning pre-game show which won four Sports Emmy Awards (1988, 1991, 1994 and 1995 seasons) and five CableACEs (1989, 1992, 1993, 1994 and 1995); NFL PrimeTime, ESPN's critically-acclaimed Sunday evening highlight show; and ESPN's Sunday Night Football telecasts. During halftime of the NFL telecasts, Berman narrates The Fastest Three Minutes in Television" featuring highlights of the day's NFL results. For 18 seasons he has hosted the weekly "Two-Minute Drill" featuring "The Swami", as well as ESPN's NFL Draft coverage. He has been hosting NFL-related programming for ESPN since 1979 -- and full-blown since 1987, when the network first acquired the rights to carry the NFL. Starting in 1996, Berman added halftime hosting duties for ABC Sports' Monday Night Football, arguably television's most celebrated sports series. Since 1990, Berman has served as a play-by-play commentator for ESPN Major League Baseball games which, beginning in 1996, includes division playoff coverage. Among Berman's career highlights was calling ESPN's Emmy-Award winning telecast of Cal Ripken's 2,131st consecutive game September 6, 1995. He also hosts Baseball Tonight, the network's nightly compendium of Major League Baseball highlights, news and features. As a studio host, anchor and commentator, Berman is known for balancing in-depth reporting with ample amounts of humor and ebullience. "Sports should be fun, and I want viewers to share in the enjoyment I get from the games. But I also owe it to those same viewers to be thoroughly prepared and to know what I'm talking about," Berman said. Berman is famous for his use of nicknames while voicing over Major League Baseball highlights. Over the last 17 years, he has been praised by the media, viewers and players across the country for his lighthearted and humorous approach. Berman's personal favorites from the more than 800 monikers he has coined include Roberto "Remember the" Alomar, Bert "Be Home" Blyleven, Jim "Two Silhouettes On" Deshaies and Wally "Absorbine" Joyner. Berman is an occasional host of SportsCenter, ESPN's daily sports news program. He was a SportsCenter regular throughout ESPN's first decade and was part of ESPN's Emmy Award winning SportsCenter team in 1990. He established his craft working the overnight shift during ESPN's first four years. "They stuck me out there at 3 a.m. and just let me go," Berman said. Berman also appears on ESPN Radio during the football and baseball seasons. Other Honors In addition to the NSSA Awards, Berman was also honored in 1990, 1992, 1994 and 1996 with CableACE Awards as cable's best sports host. Also, he was part of the SportsCenter team that won the CableACE in 1990. In 1995 and 1996, Berman was named "Sportscaster of the Year" for Studio Host category by the American Sportscasters Association. The Cable Guide readers voted him "Best Cable Sportscaster" in 1987, 1988 and 1990; TV Guide chose him as one of the "Top Stars of the 90s"; and, People magazine named him one of "TV's Most Fascinating Stars" of 1997. He has also received seven Emmy nominations as best sports host in 1990, 1991, 1993, 1994, and 1995, 1996 and 1998. In 1992, the syndicated "NFL Pre-Season Special" surveyed NFL players on their favorite football commentator and 43 percent, an overwhelming majority, selected Berman. He was also ranked No. 90 on The Sporting News' 1995 Top 100 Most Powerful People in Sports. A long-time aficionado of rock and roll, Berman has sung with Huey Lewis and The News several times, and has appeared in a video with Hootie and The Blowfish. Berman has played himself in six motion pictures, including in 1996: Kingpin, Eddie and Celtic Pride. Earlier films were Little Big League, Necessary Roughness and The Program. In 1986, while working at ESPN, Berman also provided daily weekday sports commentaries for KFRC-Radio in San Francisco and, in 1987, for WFAN-Radio in New York. Before ESPN Berman's first broadcasting position came while he was a student at Brown University as sports director for WBRU Radio and commentator for basketball, football, ice hockey and baseball games. He also assisted NBC Sports telecasts in New England and served as a correspondent for WEAN, a Providence, R.I. news radio station. In November 1991 he was inducted into the Brown University Athletic Hall of Fame. After graduating from Brown in 1977 with a bachelor of arts degree in history, Berman began his career as a disc jockey at WERI in Westerly, RI, hosting a news-oriented talk show and covering high school football and basketball games. One year later, he joined WNVR Radio in Waterbury, Conn., broadcasting high school football games, co-hosting a sports talk show and doing traffic reports. Berman's first television exposure came in 1979 when he joined WVIT-TV, an NBC affiliate in Hartford, Conn., as a weekend sports anchor."

Learn more on how to hire Chris Berman. Submit a Request Below.