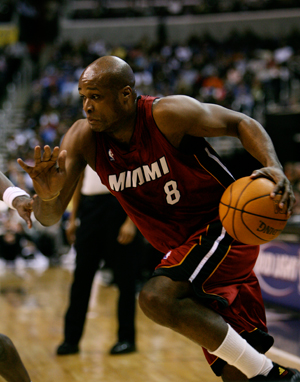 After Walker's sophomore season, he declared for the 1996 NBA Draft and was picked sixth overall by the Boston Celtics. In the 1996–1997 season, Walker made the All-Rookie First Team and led the team in scoring (17.5 ppg) and rebounding(9.0), as the team had its worst season in franchise history, 15–67. The following season, Walker made the All-Star team as a reserve while averaging 22.4 ppg and 10.2 rpg. He also scored a career-high 49 points in a loss against the Washington Wizards. In the '98 draft, the Celtics had the 10th pick and chose swing man Paul Pierce. The next few years, Pierce and Walker were the 1–2 punch for the Celtics. In the 2001–2002 season, Walker had his best overall season by helping lead the Celtics to a 49–33 record and their first playoff berth in seven years. He was second on his team in scoring (22.0), first in rebounds (9), and first in assists, (5.0). Pierce and Walker took the team to the Eastern Conference finals, where they fell to the New Jersey Nets in six games. The next season, Walker made his third All-Star team. Nine and one-half days before the start of the 2003–04 season, Walker was traded to the Dallas Mavericks. Walker was used in a relatively limited capacity on his new team due to the number of high-caliber players populating the Mavericks' roster. Included on that team was Antawn Jamison, newly acquired from the Golden State Warriors. On August 8, 2004 Walker and Tony Delk were traded to the Atlanta Hawks for Jason Terry, longtime Hawk Alan Henderson and a draft pick. On February 24, 2005, Walker was traded back to the Celtics in a deal that sent Gary Payton, Tom Gugliotta, Michael Stewart, and a first-round draft pick to the Hawks[1] (Payton was released by the Hawks and re-signed with Boston for the remainder of the season). Walker started all 24 remaining games for the Celtics, averaging 16.3 points and 8.3 rebounds a game as the Celtics advanced to the playoffs before losing to the Indiana Pacers in a 7 game first round series. On August 2, 2005, Walker was involved in a five-team, 13-player deal (the largest trade in NBA history) that sent him from the Celtics to the Miami Heat. Walker would play as a reserve. Though he struggled early to adjust to this role, by the end of the season he was a force for the Heat, finishing the season with averages of 12.2 points and 5.1 rebounds a game. In the playoffs his production would increase, as he would be the third leading scorer for the team while making crucial three-point baskets against the New Jersey Nets and the Detroit Pistons. Miami made the NBA Finals and faced the Dallas Mavericks, with Walker posting 13.8 points per game in the series as the Heat won the NBA championship in 6 games. In game 6, Walker contributed 14 points and 11 rebounds. Walker's production dipped in the 2006-2007 series as he averaged 8 points a game and 3.7 rebounds. The Heat failed to repeat as champions following a first round loss to the Chicago Bulls. On October 24, 2007, Walker was traded to the Minnesota Timberwolves along with Michael Doleac, Wayne Simien, a first-round draft pick and cash considerations in exchange for Ricky Davis and Mark Blount. On June 27, 2008, Walker was dealt to the Memphis Grizzlies along with Marko Jarić, Greg Buckner, and the rights to O. J. Mayo, for Mike Miller, Brian Cardinal, Jason Collins, and the rights to Kevin Love. After appearing in just two preseason games and remaining inactive throughout the opening months of the regular season, he was waived by the Grizzlies on December 19, 2008. In February 2010, he signed with the Guaynabo Mets along with former Chicago Bulls player Marcus Fizer. Walker was released on April 1, 2010. On May 6, 2010, ESPN reported that Walker was trying to return to the NBA. On December 7, 2010, Walker was acquired by Idaho Stampede of the NBA Development League. It was reported in April 2012 that Walker had announced his retirement after two years with Stampede.

Learn more on how to hire Antoine Walker. Submit a Request Below.