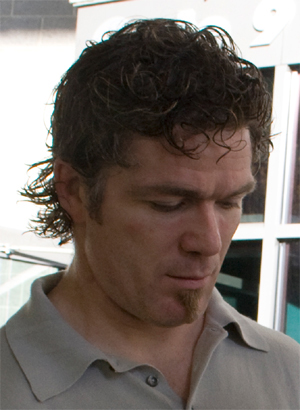 May was drafted by the Buffalo Sabres, 14th overall, in the 1990 NHL Entry Draft. He was traded by the Sabres to the Vancouver Canucks for forward Geoff Sanderson on February 5, 1998. After sitting out during the 2004–05 NHL Lockout, May signed with the Colorado Avalanche as an unrestricted free agent for two years on August 20, 2005. May's signing caused much conjecture and debate in Colorado due to his role played in the previous season's Todd Bertuzzi and Steve Moore incident as a Vancouver Canuck. He was later traded on February 27, 2007 to the Anaheim Ducks for goaltender Michael Wall. The Ducks went on to win the Stanley Cup that year, and May had his name engraved on the Cup for the first time in his career. On July 4, 2007, May re-signed as a free agent with Anaheim for a further two years. In the 2007–08 season, May played his 900th career NHL game on November 16, 2007 and scoring his 125th career goal as the Ducks beat the Los Angeles Kings 6-3. May was selected during the year to ride on Anaheim city's float at the 2008 Rose Bowl Parade to accompany and parade the Stanley Cup. During the 2008–09 season on January 7, 2009, May was traded from the Ducks to the Toronto Maple Leafs in exchange for a conditional 6th round draft pick in 2010. On April 8, 2009 May played in his 1,000th career NHL game against the Buffalo Sabres. It was no coincidence that the milestone came against the Buffalo Sabres, as he was purposely sat out for the previous game. On September 23, 2009, May was invited to try out for the Detroit Red Wings, reuniting temporarily with former Vancouver teammates Todd Bertuzzi and Dan Cloutier. May made his Red Wings debut in a pre-season game on September 25, 2009. At the start of the 2009–10 season on October 8, 2009, May then signed a one-year contract with the Red Wings. After posting 2 assists in 40 games with Red Wings May was put on waiver to clear roster room for Andreas Lilja on February 12, 2010. After clearing waivers and briefly contemplating possible retirement. May decided to report to Wings AHL affiliate, the Grand Rapids Griffins, to play out the season. In an expanded role with the Griffins May scored 10 points in 17 games before he was returned to Detroit as a part of the extended squad for the playoffs. On September 20, 2010, without an offer of a new contract, May effectively announced his retirement in accepting a position as a CBC American Hockey League analyst.[16] He currently works as an analyst with Rogers Sportsnet. On October 3, 2013, it was announced that longtime Buffalo Sabres analyst Mike Robitaille will be retiring after the 2013-14 season and former Sabres forward Brad May will join the crew on a limited basis before moving into Robitaille's slot in a full-time role for the NHL 2014-15 season.

Learn more on how to hire Brad May. Submit a Request Below.