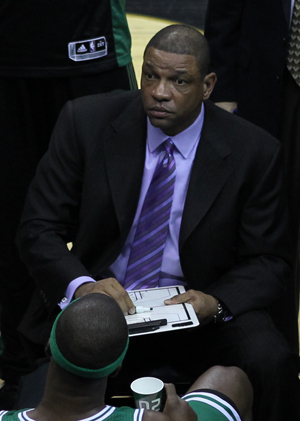 Doc Rivers began his coaching career with the Orlando Magic in 1999, where he coached for more than four NBA seasons. Rivers won the Coach of the Year award in 2000 after his first year with the Magic. That season, he led the team that was picked to finish last in the league to a near playoff berth. He made the post-season in his next three years as coach, but was fired in 2003 after a disastrous start to the season. After spending a year working as a commentator for the NBA on ABC (calling the 2004 Finals with Al Michaels), he took over the Boston Celtics coaching position in 2004. During his first years with the Celtics, he was criticized by many in the media for his coaching style, most vociferously by ESPN's Bill Simmons, who in 2006 publicly called for Rivers to be fired in his columns. As a result of the Celtics' 109–93 victory over the New York Knicks on January 21, 2008, Rivers, as the coach of the team with the best winning percentage in the Eastern Conference, earned the honor to coach the East for the 2008 NBA All-Star Game in New Orleans. On June 17, 2008, Rivers won his first NBA Championship as a head coach, although the Celtics needed an NBA record 26 post-season games to win it. Rivers played for the team that held the previous record for most games played in a single post-season: the 1994 New York Knicks played 25 post-season games. After deliberating between leaving the job and returning to spend more time with his family in Orlando, Rivers finally decided that he would honor the last year of his contract and return for the 2010–11 season. On May 13, 2011, after months of rumors that he would retire, ESPN reported that the Celtics and Rivers agreed upon a 5-year contract extension worth $35 million. On February 6, 2013, Rivers notched his 400th win with the Celtics in a 99-95 victory over the Toronto Raptors. On June 25, 2013, the Los Angeles Clippers acquired Rivers from the Celtics for an unprotected 2015 NBA first round draft pick. He also became the Senior Vice President of Basketball Operations on the team. In his first season as their head coach, Rivers led the Clippers to a franchise-record 57 wins, garnering the 3rd seed in the Western conference. Their playoff series against the Golden State Warriors was marred when TMZ released an audiotape containing racist remarks made by owner Donald Sterling. Though there was a possibility of the Clippers boycotting the series, they would play on, holding a silent protest by leaving their shooting jerseys at center court and obscuring the Clippers logo on their warm-up shirts. Rivers himself stated that he would not return to the Clippers if Sterling remained as owner the following season. On June 16, 2014, the Clippers promoted Rivers to President of Basketball Operations in conjunction with his continuing head coaching duties. On August 27, 2014, he signed a new five-year contract with the Clippers.

Learn more on how to hire Doc Rivers. Submit a Request Below.