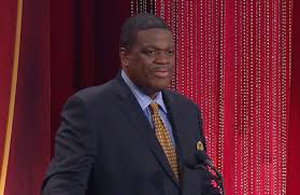 Bernard King attended college at the University of Tennessee and was selected 7th overall in the 1977 NBA Draft by the New York Nets, who months later relocated from Uniondale, New York to New Jersey and became known as the New Jersey Nets. At 6′7″ and 205 pounds, Bernard King epitomized the NBA small forward of the 1980s. With his long arms and quick release, King was an explosive runner on the fast-break and a tremendous scorer. King led the NBA in scoring in the 1984–85 season with 32.9 points per game and was selected twice to the All-NBA First Team and four times to the NBA All-Star Game. In 1977–78, his rookie season, he set a New Jersey Nets franchise record for most points scored in a season with 1,909, at 24.2 points per game. He would later surpass this record with his 2,027 point season in 1983–84, earning the first of his back-to-back All-NBA First Team selections. On a Texas road trip on January 31 and February 1, 1984, King made history by becoming the first player since 1964 to score at least 50 points in consecutive games. He scored 50 points on 20 for 30 shooting with 10 free throws in a 117-113 Knicks victory over the San Antonio Spurs on January 31. King followed this with another 50 point performance at Dallas, setting a Reunion Arena single-game scoring record in the process. He scored 11 points in both the first and second quarters and 14 points in both the third and fourth quarters. King drew 13 fouls on Mavericks defenders, including Mark Aguirre, who fouled out. King shot 20 for 28 from the field with 10 free throws in the 105–98 win over the Dallas Mavericks. The next season, on Christmas Day, 1984, King lit up the New Jersey Nets for 60 points in a losing effort, becoming just the tenth player in NBA history to score 60 or more points in a single game. King had scored 40 points by halftime, and finished the game with 19 of 30 shooting from the field and 22 of 26 from the free throw line. 6′11″ George T. Johnson primarily guarded King in the second half, starting with 5:44 remaining in the third quarter (King had 49 points by this point). Johnson blocked King on two of his shots, and held him to 1–6 shooting from the field. At the peak of his career, however, King suffered a devastating knee injury—a torn anterior cruciate ligament in his right knee. He suffered the injury while planting his straight leg before jumping, causing the knee to bend, against the then-Kansas City Kings' Reggie Theus as Theus was driving to the basket in Kansas City, Missouri on March 23, 1985. It required major reconstruction, causing King to miss all of the 1985-86 season and denying his explosive speed to the basket. Despite averaging 22.7 points per game during his first six games back, it was clear that King's explosiveness was diminished, and this prompted the New York Knicks to release him at the end of the 1987 season. However, King would have a very successful comeback with the Washington Bullets, improving his scoring average each year with the squad and returning to the All-Star Game one last time in 1991, his final full season in the NBA. After a year-and-a-half hiatus and a brief 32-game stint with the New Jersey Nets at the end of the '93 season, knee problems forced Bernard King into retirement. King retired with 19,655 points in 874 games, for an average of 22.5 points per game during his career. At the time of his retirement, King ranked 16th on the all-time NBA scoring list. At the age of 24, King won the NBA's Comeback Player of the Year award for his play during the 1980-1981 season with the Golden State Warriors. That year, King averaged 21.9 points per game after having played just 19 games the season before with the Utah Jazz.

Learn more on how to hire Bernard King. Submit a Request Below.